Here's 5% OFF on your current order. Use the coupon code to receive the discount.

A Brief but Fascinating History of Photo Booths

The history of photo booths is longer and a lot more interesting than many people think. If you are thinking of buying a booth to start your own business then you will be joining an industry with a long and rich history.

So, when did the first photo booth appear in the world? Surprisingly, these wonderful machines have been around for well over a century.

The history of photo booths begins in earnest back in 1889. This was the year in which the Eiffel Tower was opened, Charlie Chaplin was born, and the first edition of the Wall Street Journal was published.

The world’s first ever photo booth was also shown off this year at the historic World Fair in Paris. This was a coin-operated machine that took around 5 minutes to produce a photo on a thin metal sheet, amazing the visitors who were lucky enough to be there to give it a try.

If we fast forward to 1896 and hop across to Germany then we can see the introduction of the first automatic photo booth that included a negative and positive process. It was clearly a long way from the slick modern booths on sale these days but the history of photo booths was now well underway.

Photo Booths Reach the US

The distant year of 1925 was when the first television pictures were successfully transmitted, the Grand Old Opry was first broadcast on radio, and work on Mount Rushmore was authorized by the Government. In terms of the history of photo booths, this was when an exciting new model first reached the US.

A Russian immigrant named Anatol Josepho is credited with being the man who created the very first photo booth in New York City that was enclosed by a curtain. He called it the Photomaton and legend has it that it was a roaring success right away, making the inventor a fortune and adding a lot of pleasure to people’s lives.

The History of Photo Booths – The Sixties Revolution 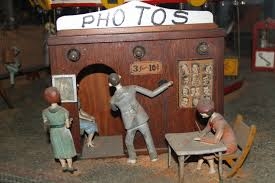 The 1960s are, of course, famous for many things. The rise of a vibrant counterculture, Woodstock, JFK’s assassination, and a strong anti-war movement made the Sixties one of the most memorable decades in human history.

This was also when the history of photo booths moved into a more modern age. For a start, artist Andy Warhol began to use portraits from booths in his work, bringing them to a wide audience.

1968 was also a hugely important year for photo booth equipment. This was when users were first able to operate the machines themselves rather relying upon an attendant. The following decade then saw color photos introduced to photo booth machines.

Finally, the history of photo booths isn’t just confined to the distant past, though. In the last few years innovative new booths have ensured that these amazing pieces of equipment are as popular as ever.

An astonishing boom in the use of portable photo booths at special events has seen the hiring out of them become a thrilling business idea. Modern booths retain the classic idea of the very first models but now include cutting edge designs and terrific software that makes using them easy and very enjoyable.

If you want to get an exciting and flexible new business that puts a smile on faces then the very latest photo booths offer an unbeatable way of doing this. After all, they have been making people smile for more than a century.